The name of my next book is “The Zero Sum Conclusion”. I’d love to hear what you think that means. Think 50 years into the future

Instead of the normal boring book trailer, my girls and I created a short comedy piece to bring a smile to your day.

Please watch the Lopinski triplets talk about “The Art of Raising Hell” in their own special way.

We thanked the wonderful straw hatted lady for bringing our supplies up the mountain and saving us from scavenging through trashcans to find half empty water bottles. Funny, how a lack of water makes your mind believe that the yellow color in a faded piece of plastic is really just Mountain Dew instead of urine.

After setting up camp, our guide convinced us to use the last few hours of daylight exploring the plateau, so we set off south toward Laguna Negra. He pointed out rock formations along the way in the shapes of frogs, monkeys, seals, condors, sphinx, naked ladies…sorry, at 13,000 feet and deliriously dehydrated, 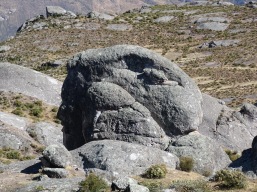 everything looked like naked ladies to me. By now, my wife was comparing me to Seann William Scott’s character in the movie, Role Model; boobs were everywhere!

Just before dusk, we found ourselves in front of the infamous Inferno. I looked down into the sinister gap between the two gigantic rocks and saw only danger. Eduardo told us a 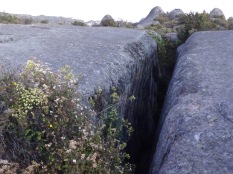 tale about a girl who jumped down in between the rocks to take a photo only to have her cell phone catapulted out of her hand by “the wind” and tossed down into the abyss below. When he asked if we wanted our photo taken in the crevice, I replied, “Photoshop.” 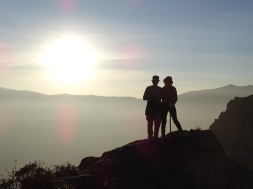 That night as Eduardo built a fire, we all sat down and enjoyed a bottle of cheap wine I’d
bought earlier in the day. As the stars filled the sky and the temperature dropped, we soon realized that our guide had no intentions of cooking a warm delicious dinner as noted in the travel brochure. When I asked, he innocently replied, “No one told me.”

A funny thing happens to you at 13,000 feet in the air. You don’t feel hungry. The human body seems to shut down all sensory nerve functions related to hunger and bowel movements. We shared a few crackers and enjoyed the pitch-black starlit sky before us. While the Milky Way swirled through the constellations a

bove and the Southern Cross glowed like a beacon guiding us into another galaxy, I realized that I was viewing something few people had ever seen: Mother Nature, untouched and unleashed.

I recalled a story about a group of adventurers who’d camped at Markawsi a few years earlier. A falling star had jetted across the sky only to stop midway in the air. It hovered for a moment and then reversed course back in the direction that it originated from. Some say it was a space ship. Others say it was too much wine. I say it was the Gods talking to us from above, reminding us that we are just human and so miniscule in the whole scheme of life.

As the campfire died out, Eduardo told us another story about a Big Foot creature that apparently lived on top of the mountain. He said he’d seen its shadow one night as he took a leak on the far side of the campgrounds. I knew that bones of giants had been found in this area of Peru dating back thousands of years but was pretty sure that nothing had been seen in centuries.

The stray dog we’d adopted earlier that day returned as we set off to bed. I’d given it some water and left over food earlier solidifying our bond of friendship. As we bundled down for the night, dusty, cold and sleeping on an unforgiving hard rock surface, I turned to my wife and said, “Isn’t this better than the Sandals Resort?” She unexpectedly replied, “Yes.”

About 2:00 in the morning, the dog took off barking chasing something lingering around our campsite in the dark. A half hour later, it ran off barking again. This became the pattern for the next few hours as images of Big Foot danced in between the different stages of parasomnia. With with one eye open, I whispered to my wife, “I’m sorry for bringing you here. We could be sipping on Margaritas right now next to the beach somewhere.” She yawned and said, “Margaritas are for pussies.”

I just realized that I’ve somehow created a “thomaslopinski” account that is connected to a “thomas.lopinski” account. I’m not sure if this is just a normal function of gmail or if I surreptitiously wiggled my way into the inner workings of some cyber hacking network without even trying. Are these accounts two brothers from a different mother or fraternal twins?

I didn’t give it much thought until a company wouldn’t send me the information I needed to do serious “things” to another account because my email addresses did not match exactly. Now I’m somewhere between here and there with no place to go. I feel like Robert DiNero in “Brazil” living on the edge of a society that doesn’t know he exist and then being obliterated by a paper trail of zeros and ones.

Please help! Are there any IT geeks out there who can humor me with a layman’s explanation on what I did or need to do to rectify this horrible misfortunate error?

I can hear my mother now, “Always wear clean underwear because you never know when you might end up in an accident.”

I didn’t really think much about this until the Northridge earthquake years ago when there were images everywhere of half-naked injured people being carted off on stretchers with tattered “wife-beater” shirts and brown underwear. Yes, she was right. Lesson learned.

What I should have realized at the time was that this applied to all clothing at all times. I had an army green colored long sleeve shirt that had been hanging in my closet for years. I don’t remember who bought it for me, probably a colorblind aunt or something, but every time I pulled it out to wear, I immediately took it off and hung it back up.

A couple of years ago, I was in a hurry to make the next showing of a movie at the mall and grabbed the first shirt I could get my hands on out of my closet. As fate would have it, I grabbed the green glob from hell. I must have had a half dozen men with crew cuts salute me as I walked by, not to mention the few fashion police who just shook their heads and rolled their eyes.

That got me to thinking: what if I was suddenly thrown into the spotlight and experienced my fifteen minutes of fame with that damn shirt on? Can you imagine what it would be like to live the rest of your life with that one image of yourself plastered all over the news and Internet? I can hear the neighbors now smirking under their breath, jokes in the bathroom stalls on Monday morning, my embarrassed children blushing…well, that wouldn’t be a first. 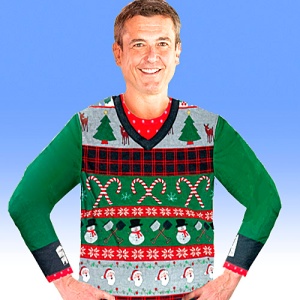 I don’t normally offer advice in my blogs but I will make the exception this time. My advice to all of you out there is to get rid of every goofy looking shirt, checkered pair of pants, and ragged pair of underwear NOW. Get rid of them all, even that tacky looking Christmas sweater must go…okay, I’ll make an exception and keep that one, and maybe the bellbottoms…you never know when they might come back in style…and I might need that polyester shirt for Halloween…

I may be going off topic with this post but that depends on whether you consider “biatching” a form of “raising hell” or not. If so, please read on.

I’ve always been one to think outside the box but sometimes I don’t understand what the people at Apple are up to. The last few releases of new versions of iTunes or OS X have led me to believe that their creative staff must get their kicks by going to blind people’s houses and rearranging the furniture.

Hello! If anyone at Apple is reading this post, please note that just moving around a few tabs and buttons does not warrant calling your new version an upgrade. Taking buttons that once had names and replacing them with a generic looking squiggly mark inside a box is not innovation, it’s aggravation.

I could go on for hours but I think I’ve made my point.

t, I watched the movie “The Rocker” starring Rainn Wilson for the very first time. I don’t know how this film escaped my radar screen all of these years, but somehow it did. I must say that it almost equaled, and dare I say these words without worrying about being struck down by lightning, the level of the best rock n’ roll movie of all time, “Spinal Tap”…but not quite.

“The Rocker” accomplished something that sets it apart from any other movie in that it defined what it means to be a hell raising rock n’ roll drummer. From Keith Moon to John Bonham to Animal from The Muppets, drummers have been the driving force behind any trashed out hotel room or 911 call over the past few decades. And if your band doesn’t have one who is fearless and half crazy, then you’re probably playing in the lounge at the Holiday Inn instead of on stage at Coachella.

I must admit that I’m not a very religious man, but I am spiritual. It’s not because I’m an avid drinker of spirits either, although divine intervention has definitely steered me away from death by intoxication on many occasions. No, it’s more due to the fact that I do believe we transcend to another world after death. Now you might think that hell raising and religion are on opposite ends of the spectrum, but, hopefully, by the end of my online rant, I will have changed your mind.

The Art of Raising Hell

It's all about Inspiration

Inspiration is our vision as it is the key to success. This Blog is about Personality Development, SEO, Amazon Affiliate Marketing, Blog ideas, and photography.

A daily selection of the best content published on WordPress, collected for you by humans who love to read.

Pouring My Art Out

Ripping out my guts for your entertainment